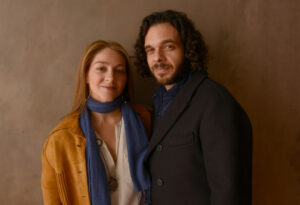 Andrea Nix Fine and Sean Fine are Oscar®, Emmy® and Peabody® award-winning filmmakers and producers whose raw, intimate storytelling style has been hailed by critics as “visually ravishing” and “enormously spirit-raising.” Their documentary-short Inocente (a coming-of-age story centering on a 15-year-old homeless, undocumented female immigrant in California) won an Oscar® in 2013 and was the first crowdfunded film to earn such a distinction. Previously, the Fines’ first feature-length documentary War/Dance, about child soldiers in Uganda, was nominated for an Academy Award® in 2007 and their 2013 HBO film Life According to Sam, about Sam Berns and his family’s fight to overcome progeria, and won both a Peabody and Emmy® for Exceptional Merit in Documentary filmmaking. In 2021, the Fines launched their impact studio Change Content with an edict to develop true stories into unforgettable narratives and docs that upend the way viewers think and feel about critical issues. They are proud to premiere LFG as the first of many projects that align with Change Content’s mission: True stories. True Impact. LFG (Let’s F*cking Go) is a powerful no-holds-barred, inside account of the U.S. Women’s National Soccer Team’s ongoing fight for equal pay with famed players – such as Megan Rapinoe, Jessica McDonald, Becky Sauerbrunn, Kelley O’Hara and Sam Mewis at the forefront, which premiered at the 2021 Tribeca Film Festival prior to its release on HBO Max.. LFG celebrates the athletic power of these world champions on the field as they wage a war off of it, and with everything – not just the fame and glory, but the very treatment of women’s sports – hanging in the balance. This groundbreaking documentary captures a defining moment not only in the lives of these women, but also in the history of women’s sports and gender equality.