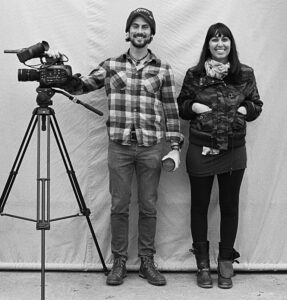 Dominic Gill is a former environmental consultant who launched his career in filmmaking by riding a tandem bicycle from Alaska to Argentina while picking up strangers on the back. In 2008 he debuted his film on the subject at Banff Film Festival taking home the Special Jury Prize with a distribution deal by the UK’s ITV4. The film, which is also a published book, has been sold many times over to over 30 territories around the world. In 2011, Dominic formed Encompass Films with his producing partner Nadia Gill. While he focused on building a strong reputation in the outdoor brand world, he also vigorously pursued his cinematography craft. While working on his own feature directorial debut “Coming To My Senses” he also DP’d the forthcoming film “Riders off Destiny,” to premiere at Thessaloniki film festival this 2019. Dominic has won numerous awards for his publishing and film work, a select few include the National Outdoor Book Award, Hiscox Courage Award Austin Film Festival, & Best Feature Documentary Mammoth Film Festival.

Nadia Gill has been creating content in the outdoor space since 2011. Formerly an attorney, she decided to pursue a career in filmmaking after meeting her directing partner Dominic Gill. Together they formed Encompass Films and produced two seasons of a travel adventure series titled “Take A Seat: Sharing a Ride Across America” which was distributed by NBC Universal. After cutting her teeth in TV, she decided to focus the company on building branded content. Over the next few years under her direction, Encompass Films built a branded clientele including Red Bull, Patagonia, Yeti and the like winning prizes at film festivals worldwide. She has additionally produced 2 feature films (Coming To My Senses, Netflix 2017; Riders of Destiny, Arte 2019) and is in production on her 3rd. Last Call For The Bayou was released on Smithsonian Channel in 2020, winning a Jackson Wild Award, nominated for a Louisiana Endowment of the Humanities Award, and an International Documentary Award.