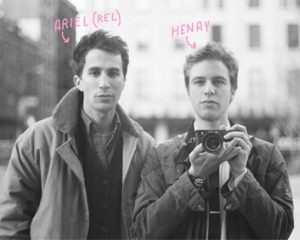 Henry Joost & Ariel Schulman met in high school. They have been filmmaking partners since 2006 and together founded the New York City production company Supermarché. Their first feature Documentary, Catfish, was the most talked about film of the 2010 Sundance Film Festival and went on to critical acclaim and a nationwide release in Fall 2010.   In March 2010, NY Export: Opus Jazz, A 35mm film adaptation of a 1958 Jerome Robbins ballet, co-directed by Henry and production designed by Ariel, premiered on PBS and won The Audience Award at SXSW.    Their first narrative feature, Paranormal Activity 3, released by Paramount Pictures in October 2011, opened to rave reviews and became the highest-grossing film of the franchise.  Henry and Ariel have also made Emmy award winning commercials and short films for some of the world’s most influential companies and institutions.  Their clients are as varied as Google, Nike, American Express, and The National Scrabble Association.   Their most recent short film A Brief History of John Baldessari, narrated by Tom Waits, premiered at LACMA in November 2011.