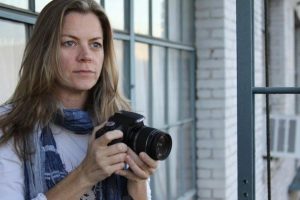 Kathlyn Horan has been working as an independent director, producer and photographer for over 15 years. Her passion for social justice has led her to use the documentary medium as a way to bring stories to light that elevate awareness, connect communities and ignite discussion. She specializes in working in an embedded journalistic capacity with her subjects in order to allow the viewer an intimate journey into often unseen worlds. Her subjects range from some of the nations leading politicians, activists and artists such as Hillary Clinton, Gloria Steinem, Sheryl Crow, and Bill Maher in “A Voice for Choice” to Zen Buddhist monks in different stages of their practice in “What is Zen?” Her most recently completed film, One Lost Day follows Grammy winning duo Indigo Girls as they head to Nashville to record with a young and untested music producer, Jordan Hamlin. Filmed over the course of a two week recording session, we are allowed an extraordinarily intimate look into how they work together, their history and what their future holds. The film had its premiere at the Country Music Hall of Fame in Nashville.

Synopsis:
The If Project is a feature length documentary that follows a group of inmates incarcerated in a maximum- security women’s prison who are part of a writing workshop co-created by a Seattle police detective and a repeat offender serving a nine-year sentence. The writing workshop provides access to an emotional depth and intimacy we are not often afforded with those behind bars. We journey with them as they take a brutally honest look into their past and work to explore, often for the first time, what exactly led them to prison. These stories serve as a launching off point to follow three of the women in the program as they are released, reunited with their families and faced with life on the outside. Most astoundingly, they do all of this with a police officer by their side every step of the way. We watch as a lasting bond is formed and this unlikely partnership between cop and convict unfolds. What the The If Project allows us is an intimate journey into a world of the locked away and forgotten. It opens our eyes to the real struggles of those who are trying to reenter society – and the many obstacles they face.