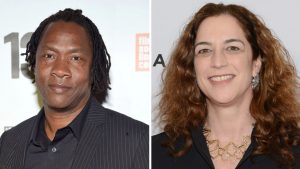 Kristi Jacobson
Kristi Jacobson, Director/Producer & Founder of Catalyst Films, is a NY-based Emmy Award-winning filmmaker whose films capture nuanced, intimate, and provocative portrayals of individuals and communities. Her latest feature film, SOLITARY, takes an unprecedented look at life inside a supermax prison, premiered at the 2016 Tribeca Film Festival and is now available to watch on HBO. The film received several accolades including an Emmy Award for Outstanding Investigative Documentary and an Independent Spirit Truer Than Fiction Award. Jacobson’s film, A Place at the Table (Participant Media/ Magnolia Pictures), called “one of the most important…and gripping non-fiction films to debut in some time” by Indiewire, premiered at the 2012 Sundance Film Festival before its theatrical release in over 35 U.S. cities. The film examines the shocking paradox of hunger in the wealthiest nation on earth through the very personal stories of three American families who face food insecurity daily. The film won the International Documentary Association Pare Lorentz Award, and was nominated for Best Feature Documentary by the Producers Guild of America. Previous films include the critically-acclaimed TOOTS, which won the National Board Review 2007 Top Documentary Award and voted 100% on Rotten Tomatoes, and American Standoff (HBO) produced by two-time Oscar winner Barbara Kopple. Jacobson is represented for commercials and branded content by NY-based production agency C41 Media.

Jacobson has appeared on The Daily Show with Jon Stewart, Moyers and Company, Cheddar, and MSNBC’s The Cycle, The Leonard Lopate Show. Her work has been featured in publications including The New York Times, The Wall Street Journal, The Los Angeles Times, The Guardian, Vanity Fair, Filmmaker Magazine, Time Magazine, and many others. She is a member of the Academy of Motion Pictures and Sciences, the Director’s Guild of America, and New York Women in Film and Television.

Jacobson mentors emerging filmmakers through several initiatives, including the Hot Docs-Blue Ice Group Filmmakers Lab through the Hot Docs-Blue Ice Documentary Fund, and the Camden/TFI CNN Films Retreat, a partnership between the Points North Institute, Tribeca Film Institute and CNN Films. She is also a two-time Sundance Creative Producing Fellow, and is a grant awardee of Tribeca Film Institute, Sundance Institute, Bertha Foundation, Catapult Film Fund, and a 2016 recipient of the Chicken & Egg Pictures Breakthrough Filmmaker Award, which aims to support filmmakers to continue to be strong advocates for urgent issues. Her television credits have earned Emmy nominations and 6 Cine Golden Eagle Awards.

Roger Ross Williams
The first film that Roger Ross Williams directed was Music by Prudence, which won the 2010 Academy Award® for documentary short subject. He is the first African American director to win an Academy Award. Williams next directed the feature documentary God Loves Uganda, was shortlisted for a 2014 Academy Award. Williams is currently working on several projects including a feature documentary about the prison industrial complex for CNN Films and the BBC, a documentary about the legendary Apollo Theater, and a VR series based on his personal story called Traveling While Black for The New York Times. He is also the chief storyteller for Johnnie Walker whisky. His latest film Life, Animated has received countless accolades including over a dozen awards at film festivals around the world, DGA and PGA nominations, and was most recently nominated for the 2017 Academy Awards. Williams serves on the board of Docubox Kenya, and recently, Williams became the trustee of the Zeitz Museum of Contemporary Art Africa; the first major museum in Africa dedicated to contemporary art. Williams serves on the Alumni advisory board of the Sundance Institute and the Board of Governors for the Academy of Motion Pictures Arts and Sciences.

On New York’s Governor’s Island, an unprecedented program has an ambitious goal: to restore once-bountiful oysters and the environmental benefits they bring to New York Harbor. What’s more, the foot soldiers of this environmental movement are an unlikely group–high school students at a remarkable public school that teaches stewardship of the waterways alongside math and English. TAKE BACK THE HARBOR highlights the stories and work of these extraordinary students and their inspiring teachers as they persevere to turn the tide on decades of neglect and bring back the health of New York City waterways.