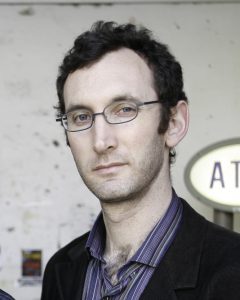 Jesse Moss is a San Francisco based filmmaker and cinematographer. The Overnighters, his most recent film, is a feature documentary set in the North Dakota oilfields. The film premiered in the US Documentary Competition at the 2014 Sundance Film Festival, where it was awarded the Special Jury Prize for Intuitive Filmmaking. He also received a DGA Nomination for Outstanding Directorial Achievement in Documentary. The Playlist and Nonfics named The Overnighters the top documentary of 2014. Drafthouse Films is currently releasing the film in theaters nationwide, and it continues to screen at festivals around the world. Previous films include: Full Battle Rattle (Berlinale Panorama, SXSW Special Jury Prize), about the US Army’s Iraq War simulation in California’s Mojave Desert; Speedo: A Demolition Derby Love Story (SXSW, PBS/POV), about a Long Island demolition derby champion; and Con Man (HBO/Cinemax), the story of a Princeton University impostor. This summer he served as an advisor at the Sundance Documentary Edit & Story Lab.