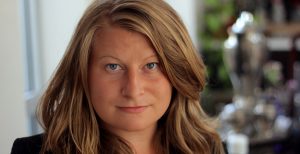 Co-founder of production company Iron Way Films, Kelly Cox has produced and directed digital series for Fortune 500 companies since 2006. She created, hosts, and directs Original Fare a food adventure series where she attempts to hunt, forage, and farm her way across the globe in search of the best ingredients our planet has to offer currently airing on PBS Food and slated to distribute internationally. She is making her feature directorial debut with Big Dream, which follows seven young women, from small town Iowa to the bustling streets of the Middle East, who will stop at nothing to overcome their big dream in the fields of science & technology. Once upon a time Kelly was selected as one of Interview magazine’s “Top 50 Under 30 To Watch” and Glamour Magazine’s “50 Women Doing Great Green Things.” She’s been a speaker at South by Southwest, Arts Presenters, Martha’s Vineyard Women’s Entrepreneurial Network, SXSW, and BlogHer Food.