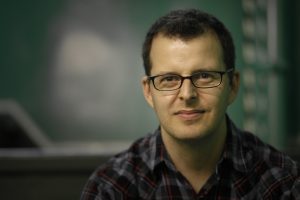 Chris Kenneally lives in Brooklyn, New York. He wrote, directed, and produced the documentary Crazy Legs Conti: Zen and the Art of Competitive Eating. Most recently he wrote and directed the documentary Side by Side which is produced by Keanu Reeves. He is currently in pre-production on a narrative feature about a teenage graffiti artist in Coney Island called Green Dolphin and is developing an episodic series called Chef.