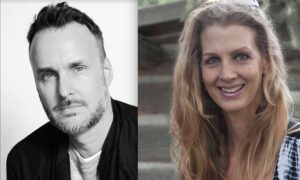 Stephen Kijak has been making critically-acclaimed films for over 25 years, collaborating with and documenting musical icons and legends such as David Bowie, Scott Walker, The Rolling Stones, The Backstreet Boys, Jaco Pastorius, X Japan, Lynyrd Skynyrd, and Judy Garland. His first documentary series was the HBO Max original EQUAL, about the decades-long fight for LGBTQ rights. His first narrative feature in 20 years, “Shoplifters of the World”, based entirely around the music of iconic British band The Smiths, was released March 26, 2021. He is currently in production on a documentary about Rock Hudson for HBO Documentary Films.

Kimberly Reed’s trailblazing film PRODIGAL SONS won 14 international awards and was the first documentary by a transgender filmmaker to be theatrically released in the US. Her next feature doc, DARK MONEY, was an award-winning selection at Sundance, was promptly named one of Vogue’s 66 Best Documentaries of All Time, nominated for 4 Critics’ Choice Awards and the IDA Award for Best Documentary, shortlisted for an Oscar, and won the duPont Columbia Prize. She was named one of Filmmaker Magazine’s “25 New Faces of Independent Film” and Out Magazine’s “Out 100.”