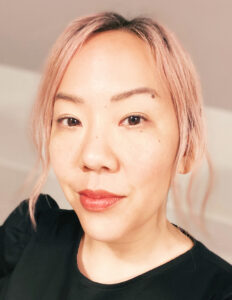 The daughter of Korean immigrants, Sue Kim grew up in Detroit, Michigan and graduated from UC Berkeley with a degree in English Literature. After graduation, she went back to school for another degree in graphic design, and then ran an independent record label before landing in the advertising industry. Since then, she’s spent almost 20 years as a commercial producer, making award winning content for brands like Nike and Adidas before pivoting to directing nonfiction films. Her documentary short, The Speed Cubers, launched on Netflix in July 2020 and has been nominated for a Critics Choice award and a Peabody award, as well as shortlisted for an Academy Award in 2021. Kim resides in Portland, Oregon with her son, Asher, a world-ranked competitive speed cuber, and is currently in production on a documentary series and a documentary feature, both set to air on Apple+ TV in 2023.