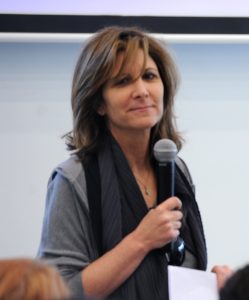 Linda G. Mills has been making films for the better part of the past decade. Auf Wiedersehen, ‘Til We Meet Again, her first film, was an intimate portrait of her family’s return to Vienna after her mother’s escape from the Holocaust. Of Many, her first short documentary, focuses on the surprising and transformative relationship between an orthodox rabbi and an imam, who serve as university chaplains in New York City. Mills’ most recent short documentary, Better to Live, chronicles the story of university drama majors who tackle the travails of college life, from coming of age to coming out and from anxiety to suicide, as they build a “reality” show for 5000 college freshmen. Mills’ films have debuted at the Tribeca Film Festival and screened at many top festivals around the world. Of Many was awarded a Wilbur Award from the Religious Communicators Council and the Grand Prize Humanitarian Award from the Best Shorts Competition. In addition to filmmaking, Mills is Vice Chancellor for Global Programs and University Life at NYU; she is also the Lisa Ellen Goldberg Professor. Her research on domestic violence treatment is funded by the National Science Foundation and the National Institute of Justice. Her work has been published by Princeton University Press, Basic Books, and Harvard Law Review, and featured in USA Today and the LA Times