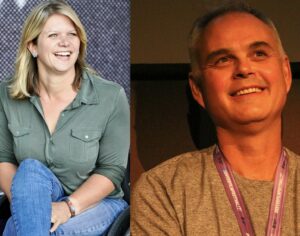 Regan Linton (she/her) is an award-winning actor, director, filmmaker, writer, educator, and disability advocate. As a paraplegic theatre professional, Regan has become an internationally-recognized leader in inclusive practices in the arts. She has performed at top regional theatres across the US and beyond, and is an avid creator of original and adapted works that upend stale narratives about non-normative humans, often through a lens of disability aesthetics. Original projects include plays, web-based series, and educational programs for youth. Regan is a regular featured columnist for New Mobility Magazine covering topics such as body image, sexuality, and self-actualization. She lives with a T-4 complete spinal cord injury.

Brian Malone is a seven-time Emmy Award winning producer, director, editor and composer. He has produced more than a dozen feature-length and broadcast documentaries for national and international audiences. Malone’s films have appeared on PBS, Netflix and a variety of other cable and international broadcast networks, as well as local and regional television stations. In 2016, Malone was honored with the True Grit Award as Colorado’s Filmmaker of the Year at the Denver International Film Festival for Reengineering Sam. In addition to all aspects of documentary filmmaking, Malone also composes the music soundtracks, one of which has won an Emmy Award for best music.