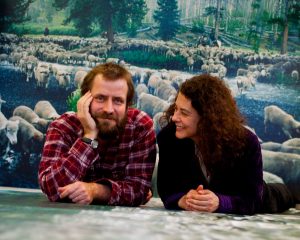 Barbash and Castaing-Taylor work in art, cinema, and anthropology.  In 2009 they completed the film Sweetgrass, at once an unsentimental elegy to the American West and to the 10,000 years of uneasy accommodation between post-Paleolithic humans and animals.  Sweetgrass was released theatrically in the United States, Canada, Latin America, France, Germany, and the United Kingdom.  Audio-video installations by Castaing-Taylor include Hell Roaring Creek (2010), The High Trail (2010), Coom Biddy (2012), and Bedding Down (2012). Previous works by Barbash and Castaing-Taylor include Made in USA (1990), a film about sweatshops and child labor in the Los Angeles garment industry, and In and Out of Africa (1992), an ethnographic video about authenticity, taste, and racial politics in the transnational African art market, that won eight international awards.  Their work is in the permanent collection of New York’s Museum of Modern Art and the British Museum, and has been exhibited at London’s Institute of Contemporary Arts, the Centre Pompidou, the Berlin Kunsthalle, Marian Goodman Gallery, the X-Initiative, and elsewhere. It has formed the subject of symposia at the Smithsonian Institution, the Musée du quai Branly, and the British Museum. Their films and videos have screened at the AFI, BAFICI, Berlin, Locarno, New York, and Toronto film festivals, as well as at the Viennale, Punto de Vista, and the Flaherty seminar.  Forthcoming works include Where The Roads All End (Barbash), a book about photography of the Kalahari in the 1950s, and Leviathan, (Castaing-Taylor and Véréna Paravel) a film about contemporary industrial fishing.  Their written publications include Visualizing Theory (Taylor, ed., Routledge, 1994), Cross-Cultural Filmmaking (Barbash and Taylor, California, 1997), Transcultural Cinema, a collection of essays by the ethnographic filmmaker David MacDougall (Taylor ed., Princeton, 1998), and The Cinema of Robert Gardner (Barbash and Taylor, ed., Berg, 2008).  Barbash is a Curator of Visual Anthropology at Harvard University’s Peabody Museum, and Castaing-Taylor is Director of the Sensory Ethnography Lab, Director of the Film Study Center, and Professor of Visual Arts and Anthropology at Harvard University.