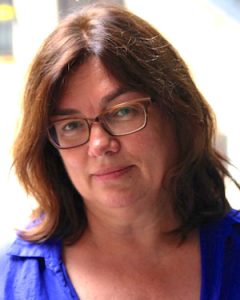 Mary Dore is an award-winning documentary producer who brings an activist perspective to her films. Dore grew up in Auburn, Maine and began her career working with a Boston film collective that produced independent historical documentaries, including Children of Labor (1977) which premiered at the New York Film Festival. She has produced television series for Maine Public Broadcasting and 13/WNET in New York. She produced and co-directed the feature documentary The Good Fight: the Abraham Lincoln Brigade in the Spanish Civil War (with Noel Buckner and Sam Sills), which screened at the Toronto, Sundance, and London Film Festivals. She has produced dozens of television documentaries for PBS, New York Times TV, A&E, and the Discovery Channel. Her TV work has won Emmys, Cine Golden Eagles, and Cable Ace Awards. She lives in Brooklyn, NY, with her husband and two sons.