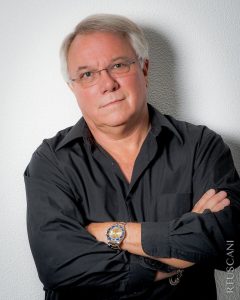 James L. Neihouse was born in Paris, Arkansas. He graduated from Paris High School in 1973 and then went on to receive his bachelor’s degree from Brooks Institute of Photography in 1976. Soon after his graduation Neihouse worked on his first IMAX film, which was directed by GraemeFerguson, one of the co-founders of IMAX. The film was Ocean and was the first underwater film made in the format. Since that time, he has gone on to work on more than 35 IMAX and other large format films. He has contributed to some of the most successful films in the format – The Dream Is Alive, Space Station 3D, HUBBLE 3D, and Ocean Oasis, to name a few. His work has garnered him many awards and accolades including two Giant Screen Cinema Association Achievement Awards for Best Cinematography, a Kodak Vision Award, and Imaging Alliance 2017 Visionary Photographer award. Neihouse is a member of the American Society of Cinematographers and the Academy of Motion Picture Arts and Sciences. He has filmed polar bears face-to-face in the Arctic, wild tigers in India, chimpanzees in Africa, The Rolling Stones on tour across Europe, space shuttle and rocket launches, great white sharks, whales, and elephant seals, as well as countless other subjects.

Synopsis:
A Beautiful Planet is a breathtaking portrait of Earth from space, providing a unique perspective and increased understanding of our planet and galaxy as never seen before. Made in cooperation with the National Aeronautics and Space Administration (NASA), the film features stunning footage of our magnificent blue planet — and the effects humanity has had on it over time — captured by the astronauts aboard the International Space Station (ISS). From space, Earth blazes at night with the electric intensity of human expansion — a direct visualization of our changing world. But it is within our power to protect the planet. As we continue to explore and gain knowledge of our galaxy, we also develop a deeper connection to the place we all call home. From IMAX Entertainment and Toni Myers — the acclaimed filmmaker behind celebrated IMAX® documentaries Blue Planet, Hubble 3D, and Space Station 3D — A Beautiful Planet presents an awe-inspiring glimpse of Earth and a hopeful look into the future of humanity.