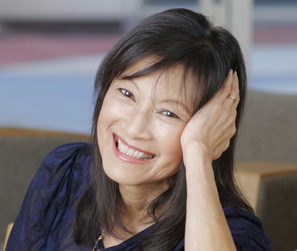 Freida Mock is an Academy Award and Emmy Award–winning filmmaker, a director, writer, and producer of feature length and short form theatrical documentary films. These include the Oscar winner Maya Lin: A Strong Vision, a feature film about the designer of the Vietnam Veterans Memorial in Washington, D.C. Mock’s other Oscar-nominated films include: Rose Kennedy, a Life to Remember; SING! about one of the best U.S. children’s choruses; Never Give UP, about the Holocaust survivor and conductor Dr. Herbert Zipper; and To Live or Let Die, a story that explores the ethics in neonatal intensive care. Her recent films are: Wrestling With Angels: Playwright Tony Kushner; Return with Honor, presented by Tom Hanks and Playtone; the feature documentary Sing China! filmed in China prior to the Beijing Olympics and featuring the world-renowned LA Children’s Chorus, and Lt. Watada, shortlisted for the 2010 Oscars, about the first military officer to refuse to deploy to Iraq and to speak out about the war’s illegality. Mock’s newest documentary film, Anita – Speaking Truth to Power, chronicle the life and times of Anita Hill. Mock was the first Governor elected to the new Documentary Branch of the Academy of Motion Pictures Arts and Sciences and served as Governor and Chair for five years. She is presently co-chair of the DGA Awards Documentary selection Committee. Mock received a B.A. from UC Berkeley, where she did graduate work in history and law. She is a partner in the Los Angeles–based Sanders & Mock Productions and co-founder of the nonprofit American Film Foundation that specializes in producing films on the arts, sciences, and humanities.