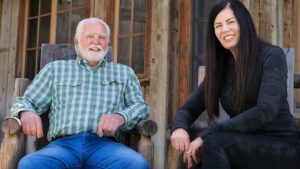 Getting Better Foundation: In the early 1990’s, Joe became interested in a perception gap that contributes to a rise in anxiety, depression, substance abuse and other challenges. Although we live in the greatest time to be alive, as war, famine, crime and poverty are on the decline, many perceive the world as getting worse. Joe believes “If people can see beyond the headlines to the truth of the trendlines, they’ll fear each other less, trust one another more, and therefore, help one another more.” In 2015, he founded the Getting Better Foundation. The Foundation has adopted media literacy as its weapon of choice to treat this perception gap. It’s helping to launch media literacy curriculum in schools. It’s first major project is “Trust Me”, the documentary.

Rosemary was Vice President & National Sales Manager for Eagle Radio Group, headquartered in Northern Michigan. She did everything from copywriting to advertising sales & community involvement, while managing sales and creative staff. Rosemary and her husband, Kent built their media group from the ground up, including radio towers, buildings and talent. In one of the worst economic downturns the state of Michigan ever faced, Eagle Radio became the “go-to” for listeners and media clients in dozens of markets. They were named “The Voice” of Northern Michigan for their award winning morning shows in each of the markets they served. Their motto of “take care of our communities and they’ll take care of us” continues to set the bar for service above self.