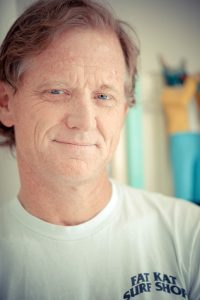 James Redford writes, produces and directs for film and television. His latest directorial project, Toxic Hot Seat, is a documentary film that examines the possible health dangers of chemical flame retardants currently used in upholstered furniture made in the USA. He is also working again with Karen Pritzker on a new documentary that explores the emerging link between childhood trauma and life-long health problems – and what can be done about it. He produced the film Watershed about the Colorado River and the acclaimed HBO documentary Mann V. Ford. Additionally, James wrote and directed Quality Time, an award-winning short comedy starring Jason Patric. He recently combined his passion for music and directing in Andain’s new music video, Much Too Much.

Other credits include producing The Kindness of Strangers which premiered at Sundance in 1999 and was picked up by HBO as well as adapting and directing Showtime’s Spin starring Stanley Tucci, Dana Delany, and Ruben Blades. Redford also wrote the original screenplays for Cowboy Up starring Kiefer Sutherland and Darryl Hannah as well as adapting Tony Hillerman’s Skinwalkers, a PBS/Mystery! Series that was the highest-rated PBS-scripted program of 2002. The Acting Thing, a comedic short written by James, was named best comedic short at the 1996 Houston Film Festival and aired on the Sundance Channel that same year. After surviving two liver transplants, James founded JRI, a non-profit dedicated to promoting a deeper understanding of the miraculous gift of organ donation.