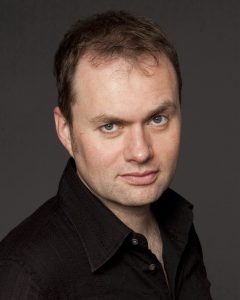 Alex was born in Bucharest, Romania, to actress Maria Rotaru and playwright Eugen Rotaru. After an early career as an award-winning teenage actor, he was the first Romanian citizen offered a full scholarship by MIT, where he earned a Bachelor of Science in Physics with minors in Music and French Literature, and graduated at the very top of his class. He attended University of Southern California’s School of Cinematic Arts and earned a Master of Fine Arts Degree in Film/TV Production. Since graduation, Alex has worked in script development, then in documentaries, helming several award-winning docs which have the unique distinction of having all been selected by the State Department’s cultural exchange programs: the New York Times Critic’s Pick THEY CAME TO PLAY (2013 Showcase selection; PBS), KIDS WITH CAMERAS (2011 Showcase selection), and the Kevin Spacey-produced, star-studded theater doc, SHAKESPEARE HIGH (2012 Showcase selection; SHOWTIME). After winning the Romanian government’s film financing competition, Alex directed, wrote and produced his first narrative feature, LOST TIME, to be launched in 2013, and is in production with SHOWSEARCH, a feature documentary about the exciting world of teenage and early-twenties aspiring Broadway musical theater authors mentored by the likes of Stephen Schwartz, Jason Alexander, Joel Grey, Darren Criss, or David Shire. Alex lives in Beverly Hills with his wife Gabriela and son Max.