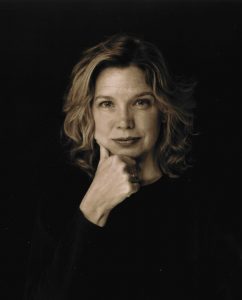 Sandy McLeod is an Academy Award nominated independent filmmaker, with experience in most of the major areas of filmmaking. Her directorial debut was in music videos, when she directed a series for VH1 called The Sixties. Her next film was Doll Day Afternoon, a short film she directed for Saturday Night Live. The film went on to be shown in museums nationwide, including the Boston Museum of Fine Art, the Walker Art Center, and the Dallas Museum of Fine Art. She worked with Jordan Cronenweth and Jonathan Demme to establish innovative textural elements of the landmark film Stop Making Sense. Then she conceptualized and directed a Talking Heads’ music video, which was featured at the New York Film Festival and is now part of the permanent collection in New York’s Museum of Modern Art. An AIDS music video that she directed is also part of MOMA’s permanent collection. She was the production designer of “Swimming to Cambodia,” a one-man show by Spaulding Gray. A further collaboration with Jonathan Demme resulted in a documentary for Channel 4 called, Haiti, Dreams of Democracy. Sandy has been a long-time collaborator with John Sayles as second unit director. She is a member of the Directors Guild of America. She directed an Academy Award nominated short documentary called Asylum–a film about a Ghanaian woman who sought political asylum in the United States to escape female genital mutilation. The film also won a Gracie and was nominated for an Emmy. Seeds of Time is her first feature length documentary film.