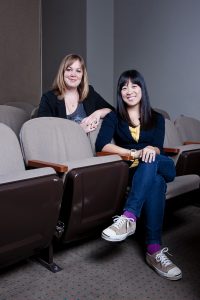 Sara Newens is a documentary filmmaker and editor who has worked in film and television for over a decade, including seven years at CBS News in New York City. Her films have screened at numerous festivals, including Sarasota, Traverse City, Starz Denver, Big Sky and Rooftop Films. She is the recipient of a Princess Grace Foundation Award, CINE Golden Eagle Award, and a Student Academy Award Regional Finalist. Currently, she is a San Francisco-based producer/editor for clients that include Facebook, PG&E, Stanford University School of Medicine, and various non-profits. She is a graduate of the M.F.A. Documentary Film Program at Stanford University, and received a B.S. in Mass Communication from Miami University of Ohio.

Mina T. Son is a Los Angeles-based Korean American filmmaker whose films have screened at film festivals and museums including the National Gallery of Art, Margaret Mead, Traverse City, Mill Valley, and Cinequest. A two-time Student Academy Award Regional Finalist, Mina has been awarded fellowships and funding from Independent Television Service, Stanford Institute for Creativity and the Arts, Film Independent, PBS/CPB Producers Academy, the Japan U.S. Friendship Commission, and Center for Cultural Innovation. Mina holds an M.F.A. in Documentary Film from Stanford University and a B.A. in Psychology from the University of California, Los Angeles.