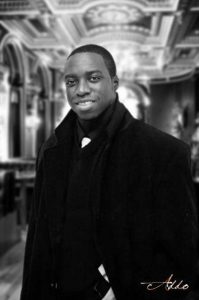 Sean A. Addo is a graduate student at the USC School of Cinematic Arts. He studied motion graphics at the University of Cincinnati, while working as a junior designer creating broadcast packages for several prime time networks such as FOX, ABC, NBC, and many more, before working at the Procter and Gamble company as a products researcher, and scientist engineer. After taking the time to travel in Europe and rediscover what meant the most to him, he realized that his passion was to help impact the world creatively, and he decided to pursue this feat through film. Since then he has completed award winning shorts, Medowo, and Deeper Than Black. His feature script has been considered as a finalist for one of Sundance’s lab, and he has recently worked as the DP for 2016 feature film Inquisitor. Sean has established himself as a director, writer, and cinematographer that brings a unique voice to the big screen. His West African roots and his ability to communicate to a Western audience presents a rare cross cultural hybrid of content that is fresh to the ever evolving entertainment industry.