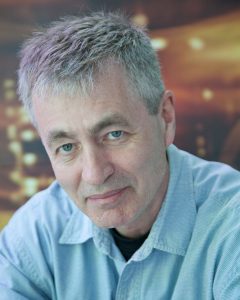 Steve James is best known as the producer-director of Hoop Dreams, winner of every major critics prize of 1994, as well as the Directors Guild of America Award, and the Peabody and Robert F. Kennedy Journalism Awards. Hoop Dreams was named to the Library of Congress National Film Registry, signifying its enduring importance to the history of film. His other award-winning films include Stevie, which won numerous festivals and landed on a dozen ten best lists for 2003; the miniseries The New Americans, winner of the 2004 IDA Award for The Best Limited Series; The War Tapes, which James produced and edited, and won the Tribeca Film Festival Grand Prize in 2006; At the Death House Door, which won numerous awards at festivals such as Full Frame, DOC AVIV, DOCNZ, and Atlanta and was nominated for a Directors Guild of America Award; and No Crossover: The Trial of Allen Iverson for ESPN’s Peabody and IDA award-winning “30 for 30” series, for which James’ film was selected for the prestigious American Documentary Showcase in 2011. James’ most recent film, The Interrupters, is his fifth film to premiere at the Sundance Film Festival, and was a hit on the festival circuit where it garnered the Grand Jury Prizes at the Sheffield Film Festival, Miami Film Festival, and Minneapolis Film Festival, and a Special Jury Prize at Full Frame. It took the two top Cinema Eye Awards for “Nonfiction Feature Filmmaking” & “Best Direction” and is nominated for an Indie Spirit Award. The Interrupters was listed on many “2011 Best Films of the Year” lists including Time, The New Yorker, Chicago Tribune, Boston Globe, Slate, and the LA Times, and was named “Best Documentary of the year” in both the IndieWire and Village Voice national critics polls.