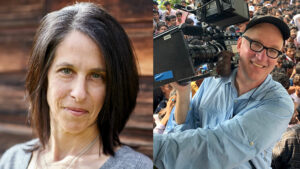 Beth Levison is an NYC-based Emmy and Peabody-winning producer/director. Most recently, she produced THE MARTHA MITCHELL EFFECT, which premiered at the 2022 Sundance Film Festival and is streaming now on Netflix. Prior to that, she directed and produced STORM LAKE with director/DP Jerry Risius, which broadcast on PBS’ Independent Lens and was nominated for a Peabody Award. Additional producing credits include WOMEN IN BLUE (Independent Lens, 2020), Emmy-nominated MADE IN BOISE (Independent Lens, 2019) and 32 PILLS (HBO, 2017). Levison is a co-founder of the Documentary Producers Alliance, producing faculty at Sarah Lawrence College, and a member of AMPAS.

Jerry Risius was born on a farm on the Iowa side of the Iowa/Minnesota border. He grew up working on the family farm, went to the University of Iowa and then joined the Peace Corps/Ecuador in the mid-1980s. In 1990, he moved to NYC and began to pursue a career in documentary filmmaking. He worked along side many talented Directors and DPs as a Camera Assistant, after he purchased a Sup16mm camera, he soon began to shoot. Presently, he has over a 25 year career dedicated to documentaries. His clients include: PBS (Independent Lens, POV, NOVA, Frontline, etc.) HBO, Netflix, Apple TV, Amazon, Showtime, among others. He lives in Brooklyn NY with his wife and daughters.