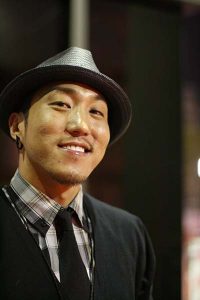 A few short years ago, Los Angeles-based filmmaker Tadashi Nakamura was named one of CNN’s “Young People Who Rock” for being the youngest filmmaker at the 2008 Sundance Film Festival as well as one of the “30 Most Influential Asian Americans Under 30” by the popular website Angry Asian Man.  Now the 32 year old, fourth generation Japanese American has completed his first full-length documentary – on internationally acclaimed ukulele virtuoso Jake Shimabukuro – slated for national PBS broadcast in early 2013.

Nakamura’s trilogy of documentary films on the Japanese American experience, Yellow Brotherhood (2003), Pilgrimage (2007) and A Song for Ourselves (2009) have garnered over 20 awards at film festivals around the world with Pilgrimage being one of 83 short films out of 7,500 submissions selected for the 2008 Sundance Film Festival.  Film scholar B. Ruby Rich remarked, “Nakamura takes the joy of activism and makes it downright contagious!”