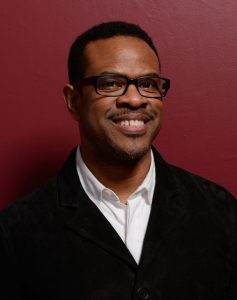 Thomas Allen Harris is the founder and president of Chimpanzee Productions, a company dedicated to producing unique audio-visual experiences that illuminate the human condition and the search for identity, family, and spirituality. Chimpanzee’s innovative and award-winning films have received critical acclaim at international film festivals such as Sundance, Berlin, Toronto, FESPACO, Outfest, and Cape Town; have been broadcast on PBS, the Sundance Channel, ARTE, CBC, Swedish broadcasting Network and New Zealand Television; and exhibited at the Gwangju Biennale in South Korea, the Melbourne Arts Festival and MoMA. Mr. Harris’ newly released film, Through A Lens Darkly: Black Photographers and the Emergence of a People, won the NAACP Image Award for Outstanding Documentary (Theatrical), the Fund for Santa Barbara 2014 Social Justice Award and a Best Diasporic Documentary Award from the Africa Movie Academy Awards in Nigeria. Called “Wise and Passionate” by the New York Times and “Extraordinary” by Time Magazine, Through A Lens Darkly is presently opening in theaters across the country, accompanied by its transmedia community engagement project Digital Diaspora Family Reunion (1world1family.me), an interactive forum that combines film, photography, social media and oral histories in a live touring event. Since 2009, Digital Diaspora has held 18 Roadshows in 9-cities, and received in excess of 10 million media impressions. Harris is a recipient of numerous awards and fellowships including a Tribeca Film Institute’s Nelson Mandela Award, and United States Artist, Guggenheim, and Rockefeller Fellowships. A graduate of Harvard College with a degree in Biology, Mr. Harris has taught as an Associate Professor of Media Arts at the University of California San Diego and a Visiting Artist at the International Center of Photography. A published photographer, curator, and writer, Mr. Harris lectures widely on the use of media as a tool for social change.