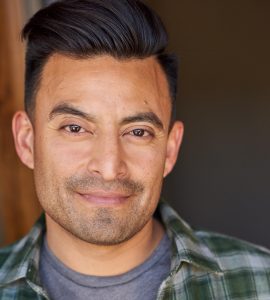 Fernando makes his directorial debut with ANY ONE OF US after two decades of editing feature films and documentaries. His credits include: Rize, Crank: High Voltage, Every Little Step, and Mom and Dad. Fernando has worked with an array of notable directors including Davis Guggenheim, Marc Webb, Francis Lawrence, Brian Taylor and Michael Gondry.

When professional mountain biker Paul Basagoitia suffers a devastating spinal cord injury (SCI), his life is changed in an instant. Discovering that he’s become paralyzed, Paul begins a grueling battle against his own body and mind, in the hope of one day being able to walk again. His excruciating recovery unfolds in real time through raw, intimate footage— much of which was filmed by Paul himself—as we see him fight through the agonies of an unpredictable journey and uncertain future. A chorus of other diverse SCI survivors weaves through the film, shining light on the struggles that Paul now faces. After years of relentless hard work, intense physical therapy, and even controversial stem cell treatments, Paul slowly begins to build a new life for himself. Any One of Us shows how lives can change forever in the blink of an eye— and the resilience, grit, and determination it takes to stay open to life’s possibilities, even under the most trying of circumstances.