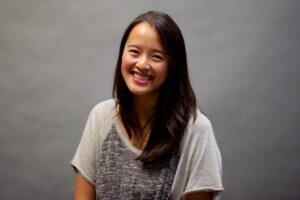 Ellie Wen is an award-winning filmmaker from Hong Kong and Los Angeles. She began her career in Los Angeles where she produced independent films and worked at CAA, CBS Films, and Super Deluxe. Ellie is an alumna of Film Independent’s Project Involve fellowship program.

Her first short documentary “Single Mother Only Daughter” premiered on Short of the Week and is a Vimeo Staff Pick. Her short documentary series “Doing Good Business” was acquired by Participant Media’s SoulPancake.

Ellie recently received her MFA in Documentary Film from Stanford University where she produced four short documentary films. “Share,” has screened at DOC NYC, Frameline, Big Sky, DOK Leipzig, Outfest, CAAMFest, and was released on The Guardian. For her film “On Mother’s Day,” Ellie was named Best Local Filmmaker at the UN Women Global Voices Film Festival. Her film “25 Hours” was a finalist in the WrapWomen and Starz film contest and was distributed on Starz TV and digital. During her final year in the MFA program, Ellie was awarded the UFVA Carole Fielding Student Grant for her thesis film, “The Missfits.”

She now lives in San Francisco and is developing her next documentary as a resident in the SFFILM FilmHouse Residency Program.